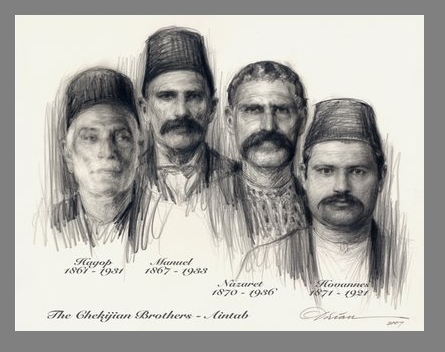 Before that, though, the four brothers learned how to be tailors from their father in Aintab. The brothers were successful there, and they
did not adopt the European styles and fashions of the time. They created custom-made military officer uniforms, and this was one of
the key reasons why the Chekijian brothers survived the Armenian Genocide of 1915. But their custom tailoring trade essentially became
obsolete after World War I because the Ottoman Empire fell, mass production factories emerged and European-style suits became the
norm. All four brothers survived the Genocide. They died of natural causes in the 1920's and 30's, Hovhaness in
Aintab, and Manoog, Nazaret, and Hagop, in Aleppo.

A recent genealogical DNA test of a living Chekijian male indicates that the family’s genes had originated 50,000 years ago in Ethiopia,
migrating through the Nile valley to the Fertile Crescent and up to as far as Rome. The results also show that the DNA of 20% of the
population of southern Spain and Southern Italy and 40% of Scots and Brits has the same J2 genealogic origins: 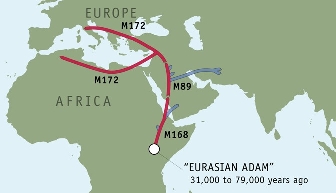 - The FIRST Chekijian in the U.S.