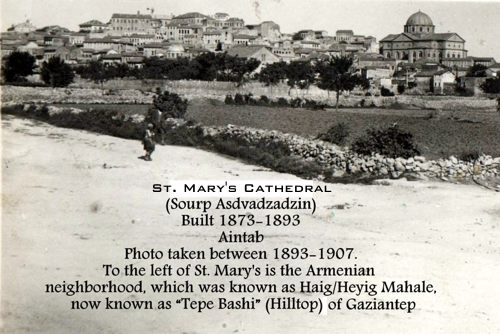 Let's go way back. According to Cesar Chekijian's research, Aintab was originally a regional market town when 3,000 years ago the Hittites called Andiabe [“Ain”
and “Dayib” together mean “tasty water spring”], and the Crusaders called it Hantab. Its location on the Silk Road connected it to trade
routes to India, Persia, the Middle East, Jerusalem, Egypt and Europe.

Aintab is perched at an elevation of 3,100 feet on the Taurus (Toros) mountain chain. This is located on the eastern fringes of the Armenian
kingdom of Cilicia, and 85 miles (130 kilometers) north of the ancient fortress city of Aleppo - a metropolis which has a recorded history
dating back 5,000 years. By the way, Aintab today is known as Gaziantep.

So the Chekijian family would have never ended up in Aintab, were it not for Foreign Minister Nubar Pasha Nubarian (1825-1888) of Eygpt.
Nubarian had an uncle whose name was Boghos Bey Yusufian (1768-1844). Yusufian was the Secretary to the Egyptian Wali (governor),
Mohamed Ali – he was the Wali’s Chief Dragon Master (a title akin to “chief of staff”) and his most trusted advisor on judicial, economic
and military matters.

Yusufian masterminded the Wali’s takeover of Ottoman lands from Cairo to within 100 miles of Constantinople in the early 1830’s – and
the Wali’s military command was based in Aintab. In order to service the need for supplies of his military commanders, Wali had relocated
approximately 30,000 Armenian artisans and their families from regional commercial centers to Adana (near Mediterranean seaports
in present-day southern Turkey) and Aintab, which served as the key military garrison. It is the early 1830s.

FINALLY, A CHEKIJIAN COMES INTO THE PICTURE

One of the relocated Armenian craftsmen was a prominent tailor by the name of Hagop Chekijian (son of Krikor Chekijian born in the
1790s). Hagop was forced out of Caeserea (now Kayseri in central Turkey, an ancient Roman town about 100 miles northwest of Aintab).
Hagop and his family of ten sons (not a typo!), ended up in bustling Aintab where the population swelled from 30,000 to 100,000 by
1840. Hagop opened a tailor workshop. He was successful, as shown in the fact that his excellent craftsmanship was cited in the book A
Briefer History of Aintab (Union of the Armenians of Aintab, 1957). One of Hagop’s sons was named Kevork, who was the youngest and
was also born in Caesarea according to the same book. During that period, most of young Kevork’s nine elder brothers must have left
Caesarea - some may have perished due to the cholera epidemic that swept the area in the mid 19th century. One of Kevork’s brothers
may have settled in Marash (a suburb of Aintab), and one or two may have moved as far north as Ankara or Istanbul. By the 1850s, only
Kevork Chekijian remained in Aintab, and he apprenticed at a young age at his father’s tailor shop. In the late 1850’s, Kevork took over the
business. He married Meroum Danielian (had a brother named Sarkis who was a cooper – “Kazanji”, his sons followed the same trade and
by 1920, changed their names in Lebanon to Kazanjian).

- MORE on the sons of KEVORK

- The FIRST Chekijian in the U.S.