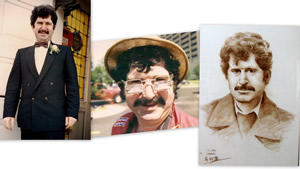 Hrach Chekijian was born on September 21, 1949 in Beirut, Lebanon to Hagop and Siran Chekijian, both survivors of the Armenian Genocide. At age 7, Hrach moved to Baghdad, Iraq with his parents, his older brother Cesar and his younger sister Araxi. Hrach grew up in Iraq for the next 14 years, and then a younger sister, Silva, was born.

From a young age, Hrach pushed boundaries. And everything was an adventure. In the early 1960‘s, when he was in his early teens, Hrach noticed an Austin Mini driving on the street and he ran after it. It was love at first sight and the beginning of a love affair that lasted half a century. His last waking moments - which were filled with laughter - were even among Minis, at the dealership where he worked in Peabody. But this came much later.

Hrach went to high school in Iraq, and after he graduated, he decided to join his father’s jewelry business in Lebanon, where he apprenticed as a gemologist and diamond setter. During his time there, and when he moved back to Iraq, Hrach used to write to his brother Cesar at university in London, England. Hrach would mainly ask Cesar about Minis.

On his 21st birthday, Hrach immigrated to the U.S. It was 1970. He came with his family to 21 Elton Avenue, right across the street from his church. The family was there for 21 years. Hrach made much of this curious coincidence with the number 21, and forever after he considered the number to be an omen. He’d point out that Armenia even became independent on the 21st - on his 42nd birthday, in fact.

In early 1971, Hrach’s dream came true: Cesar sent him a Mini from London. Even though Hrach continued the gemology business after his father passed away in 1990, he was spending more and more time in the world of Minis. This involved trips through North America and Europe. And one Mini turned into multiple Minis. If there was a Doctorate on Minis, he would have been granted it 25 years ago. He said in a 2002 Boston Herald profile, “NOBODY is as passionate as me about the Mini.”

At the turn of this new century, Hrach was busy re-introducing the Mini to the world, and his enthusiasm caught on. Soon enough, the car went into production again, and Hrach saw an opportunity to meld business with pleasure. He sold his jewelry business in downtown Boston and joined the car company's sales team.

And what was it about the car that appealed to him? He said it himself in the Herald article when he said “history, shape, character and originality”, themes that carried over into his other interests like world history, cooking and travel.
Hrach is survived by his mother Siran, his brother Cesar, sisters Araxi and Silva, four nephews Jack, Scott, Derek and Berj and two nieces, Lori and Anita.

The impact from the sudden loss of Hrach has been awe-inspiring. Relatives from all over the world have called the family. From Hawaii to Dubai, to his co-workers in Peabody and friends all over the U.S. like the New England Mini Owners, Hrach is being praised for his pure fun loving spirit and his bigger-than-life presence.

Every time you pass a Mini Cooper on the road- and know that if Hrach was driving, HE'D be passing YOU - smile and think fondly of him.